St.Amant acknowledges that we are on Treaty 1 Territory, the traditional gathering place of the Anishinaabe, Cree, Oji-Cree, Dakota and Dene people and the traditional homeland of the Métis people. Read More

“We broadcast a vast array of world-class events but there is nothing quite like the Special Olympics. They are a sincere reminder of the transformative power and joy of sport,” said Stewart Johnston, President of TSN. “We’re so proud to be a long-time ally of Special Olympics athletes and we wish the best of luck to Team Canada and the rest of the athletes in Los Angeles.”

Along with live coverage of the Opening Ceremony, TSN’s programming lineup includes:
• Countdown to the Special Olympics World Games with Robin Roberts on Thursday, July 23 at 9pm et on TSN3, TSN4, and TSN5

• The 30 For 30 film Brave in the Attempt from Executive Producer Maria Shriver – whose mother Eunice Kennedy Shriver founded the Special Olympics in 1968 – on Monday, July 27 at 7:30pm et on TSN4 and TSN5

• Nightly highlight shows from July 27 to August 7 at 11 or 11:30pm et on TSN2, which will include interviews; athlete features, vignettes, and stories; competition showcase; and recaps of key results from each day’s competition

In addition, SportsCentre and TSN.ca keep fans updated on key Team Canada performances and results throughout the week-long event.

By the Numbers via ESPN.com

Almost 50 years after the Special Olympics was founded, the renamed Special Olympics World Games will be the largest sporting event held in the United States this year (based on participants) and the biggest in Los Angeles since the 1984 Summer Olympics. Here’s a look at some numbers behind the event and its growth through the years: 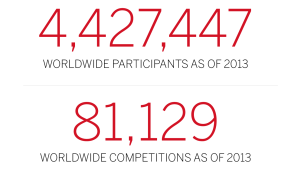 • International participation: Outside of the World Games, Special Olympics athletic competitions are held year-round worldwide. Since 2000, international athlete participation has increased 4.5 times. There have been 4.4 million worldwide participants as of 2013.

• International events: In 2013, an average of 222 athletic competitions were held daily around the world, more than double the 2008 average of 90 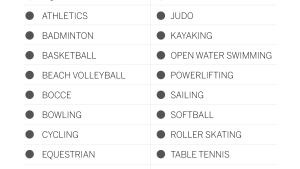 • World Games events: Several locations around Los Angeles, including USC and UCLA, will combine to host 25 sports. While many of them are Olympic-style sports, there are also non-Olympic events such as bocce, bowling, and roller skating.

• World Games Inclusion: When Los Angeles hosts the World Games, athletes, coaches, and families from 177 countries will participate. Between Unified events, which pair Special Olympics athletes with able-bodied ones, and Special Olympics competition, 290 events will take place in L.A.

Browse the News Article archive. This entry was posted in What's New at St.Amant. Bookmark the permalink.
Book Vaccine Appointment